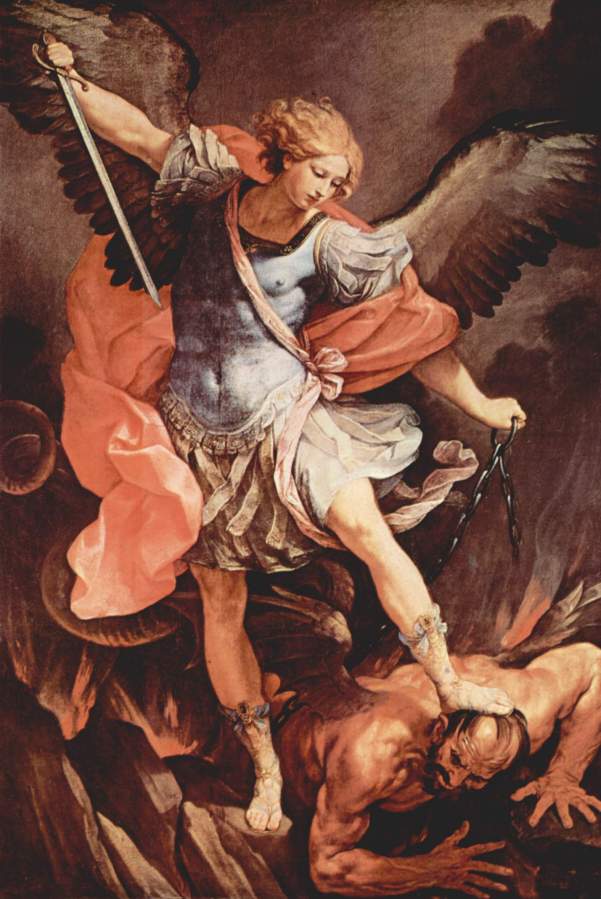 Drum roll please….we have another Prayer Breakdown!!! This time we are going to break down a well known prayer and one that is quite powerful: The Saint Michael the Archangel.

St. Michael the Archangel, defend us in battle. Be our defense against the wickedness and snares of the Devil. May God rebuke him, we humbly pray, and do thou, O Prince of the heavenly hosts, by the power of God, thrust into hell Satan, and all the evil spirits, who prowl about the world seeking the ruin of souls. Amen.

St. Michael the Archangel, defend us in battle.

There is a reason that this prayer should be prayed every day, because we are constantly in a battle. Ever since the fall of satan and then later the fall of man, there has been a constant battle. When Adam and Eve defied God they did it because their pride got the best of them. This is what too often occurs with us humans and where our major weakness is. That is why we have to make a conscious effort to fight this part of ourselves that could cause complete separation from God. If you live your life how Christ told us to then the enemy will try his best to cause you to falter and to turn away from God. That is why Saint Michael is here to help defend us.

Be our defense against the wickedness and snares of the devil.

The devil is always going to be waiting for any of us to show any sign of weakness. He is also setting up snares, just like a hunter, to capture the followers of Christ. Through Christ we can find strength and through Saint Michael we can find a good defense team mate. He of all the angels understands the most how evil the devil truly is, he is the one who kicked the devil out of heaven. We are tempted everyday to the lures of sin and the one providing those snares are the devil. This is why we have to be on constant guard against him, avoiding occurrences that can cause us to sin and people who don’t have Christ.

May God rebuke him, we humbly pray, and do thou, O Prince of the heavenly hosts, by the power of God, thrust into hell Satan, and all the evil spirits, who prowl about the world seeking the ruin of souls

Saint Michael can be our biggest spiritual cheerleader, besides Jesus Christ of course. He is our prince on earth because he is here to defend us against the ways of satan. Which is where O Prince of the heavenly hosts comes from; because he is our prince that was assigned here by God. There is one very poignent and down right scary line from this prayer: who prowl about the world seeking the ruin of souls. That is their one goal, their one desire – to ruin our souls. When we pray this, we include in there our own soul that the devil will try to ruin. This is done through sin which the devil makes it seem as if it is okay – it feels right so why not? That is the mantra that so many people have in today’s society which is exactly what the devil wants. Instead we should be asking what God wants, what Jesus would want us to do and how can we live Christ’s life for us. These are ways that we can stop the devil from becoming a wrong part of our life.

Make the Saint Michael a constant part of your prayer life because we are in a battle. It is not the battle against the devil that Hollywood portrays. No, because this battle can lead to eternal separation from God.