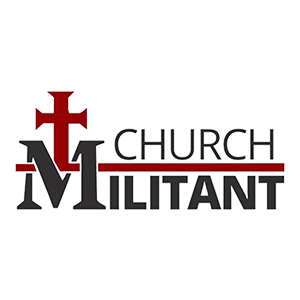 As you all know I am a huge defender of the faith, as Catholics we all should be! That means I am always on the lookout for others who share that same passion and commitment. My dad is the one who shared with me the group Church Militant. From that moment I have been following them, their stories and I am amazed at the level of dedication and faith they have for their faith.

There is no doubting that the number of people who are “strict” with their faith are dwindling. On a side note the word strict has been given a negative connotation, mostly by those who are in the study of psychology. I know this because I majored in Child Psychology and let me say that is a huge reason I changed to Theology. Being strict is defined as demanding that rules concerning behavior are obeyed and observed. Not only are “specialists” saying that it can cause bad behavior in children but it has also trickled down into churches. People not kneeling during the transubstantiation, chewing gum during Mass, Mass looking more like a soundstage for music, and the list goes on!

Being strict is as basic as tying your shoes. It means behaving the way that God wants you to, doing the right thing and being a good person. Acceptance of our behaviors and the consequences they entail help us to become closer to God.

With that being said, often times Catholics, such as Church Militant and others who stick up for the church can be seen as strict. The word that comes to mind when people speak about the more liberal Catholics, is they seem to have more compassion. They accept homosexuals because they are who God “made” them, they say that marriage should be between anyone, women who are in a tough position can get an abortion, who are we to judge? Again, just like strict was given a negative connotation, compassion has been given a distorted one.

We can’t blur the lines between good and evil because times are changing and we’re getting more modern. That’s like you looking directly in Jesus’ face and saying that you are going to mold His teachings so that others who are living in sin can feel more comfortable. Hey, we’re a changing and more modern church Jesus, you should understand!

That is so wrong and beyond blasphemous. What is more compassionate? Expressing to someone that the life they are leading will lead them to hell, or accepting the behavior and even condoning it.

If you have free time, go out and check out their site! Not only do they have well written articles but they also have different shows that are very informative. There is also a store where you can buy different articles like jewelry, bumper stickers, Holy Water, books and much more! Go have a look J

They receive an A+ rating from me! Support them and spread the word!